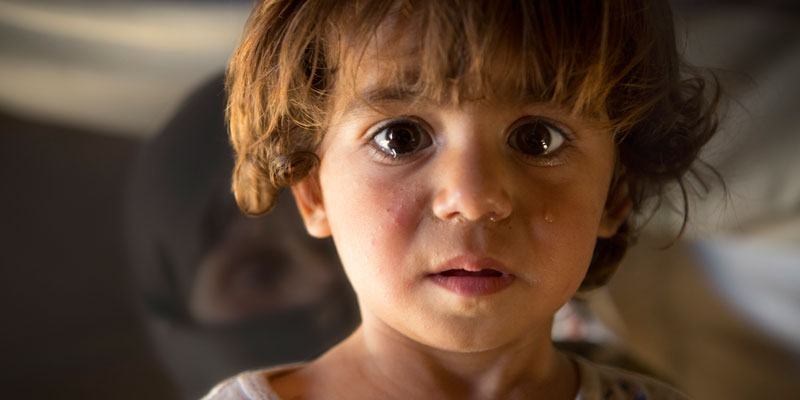 Maram scrunches up her little nose and pauses as she remembers. The eight-year-old was daddy’s favorite.

“When he was going to work he was shot,” she says. By whom, no one can say for sure, but Syria’s merciless war does not differentiate between combatant and civilian — and it is leaving behind countless children like Maram who have lost one or both parents along with their innocence.

“I saw him when they brought him to the house when he was dead,” Maram continues. “I said ‘God have mercy on you’ and I prayed.”

She has an inquisitive, heart-shaped face. She listens intently to our questions, and often stops to think before answering.

She is one of around 34 children between the ages of two and 10 who live during the week at the Beyti Orphanage in southwest Turkey, near the Syrian border. Their fathers are all dead — some lost to illness and some, like Maram’s dad, to the violence consuming Syria. Their mothers, refugees in Turkey, can’t afford to properly clothe and feed them.

At Beyti there is bath time, fresh clothes, and beds to sleep on. There are toys to replace those that the children had to leave behind, regular hot healthy meals, and clean water to wash with.

Maram and her friend Mohammed whisper next to me on the couch. He pulls a tie out of his pocket. “Someone was giving them out,” he explains.

The pair erupt in giggles as Maram tries to put it on him. Her father had taught her how to tie the knot, but she doesn’t really remember.

“Are you guys best friends?” I ask.

“We’re not friends, we’re siblings,” Mohammed replies. Maram looks at me, her eyes open wide, and she smiles.

“He considers himself my brother,” she tells me.

“We’re all family here,” another child pipes in.

The Beytin Orphage, which opened in September, was established by the Maram Foundation. It was named not the little girl we met, but for another of the same name who was paralyzed from the waist down by a shrapnel wound to her spine.

“We’re trying to raise our children away from all of the ideologies happening inside Syria,” Beyti’s co-founder Yakzan Shishakly tells us, alluding to the radical extremist violent Muslim ideology that is thriving in his homeland. “And we also want to give them the right to have a normal life away from the war because of the regime.”

The focus here is not only on trying to create a “normal” environment, but also on helping these children heal from the trauma they witnessed.

“There were some cases that were very obvious, those were the cases of anger and aggression,” says Mayada Abdi, head of the orphanage, describing some of the children who have come to Beyti since it opened.

Maram was very solitary when she first arrived, preferring to stay alone.

“She would remember things that were beautiful memories that were taken from her, especially those that were tied to her father, all her trips,” Abdi says. “All her stories are about her father. So you would often find her sitting remembering those times.”

Nothing can alter the inexplicable pain brought into these children’s lives by violence that defies logic, from a war they are too young to understand. But at least here they have a chance to perhaps move past it and salvage what they can of their childhood.

Maram, for one, is already looking to the future. “I want to be an Arabic teacher,” she says. “Back home in Syria.”